Key step in P2P lending to transform the banking system 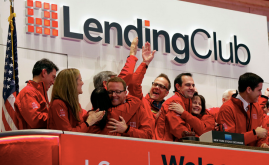 LendingClub announced on April 14th that it is partnering with Citigroup. Lending Club is the world’s largest peer-to-peer lending marketplace. In December 2014 LendingClub made its debut on the New York Stock Exchange and raised nearly $860 milion in the first ever-initial public offering for an online lending platform. LendingClub now has a market valuation of $9 billion, making it the 14th-biggest bank in America.

The partnership with Citigroup marks another debut, it is the first partnering with a so-called universal bank. According to Renaud Laplanche, LendingClub’s founder and chief executive, Citi will use the firm’s platform to supply up to $150 milion to “underserved” borrowers that its branch network is unable to reach. It is a key step in the attempt by the peer-to-peer lender to “transform” the banking system.

Citigroup is the number three US bank by assets, This is not the first partnership of LendingClub with a large corporation. Just a month ago LendingClub entered a partnership with Alibaba group to provide financing for manufacturers in the United States to buy products and supplies through the Chinese marketplace Alibaba.com

Summers sits on the boards of both LendingClub and payments company Square, which recently started offering working capital loans to small businesses. On April 15th, a day after the announcement of the partnership between LendingClub and Citi, he delivered the keynote address at the Lendit conference in New York.

In the next decade, Summers said, non-bank alternative lenders, using technology that crunches big data in ways that let them lend to borrowers that banks consider too risky, could be responsible for as much as 30 percent to 40 percent of consumer lending, and up to 75 percent of small-business loans.

The new lenders will diversify the lending environment, Summers said. And since alternative lenders don’t hold loans on their books, as banks do, there is less danger of them becoming “too big to fail.”