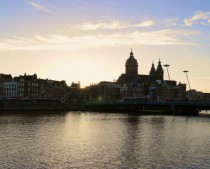 Flowing Economy got started with the idea that society needs foremost trust and not necessarily money to let the economy flow. Since the financial crisis the dominant belief seems to be that there is a scarcity of money and that this is severely hindering the economy. Not money is essential, but people connecting and collaborating together is essential. On this website you will find all kind of news, trends, blogs and publication that proves that the economy can flow, with or without money. The items are randomly selected, without a higher goal, like a river choosing its way through the landscape.

We are living in a society with an economy that Yochai Benkler describes as the networked information economy: the basic dominant output in this advanced economy is human meaning and communication. The Internet with its online platforms is a key factor for the networked information economy. One of the striking examples is Wikipedia that has mobilized a collective of millions to produce an enormous, high quality, encyclopedia without traditional forms of hierarchical organization or financial incentives.

The logo reflects how in earlier times, without a master plan and detailed regulations and law, people settled at the riverbanks. Their trade hubs developed into villages, and villages became cities. What the rivers once where for the physical trade hubs, is what the online platforms, and their underlying technology, are for the economy today.